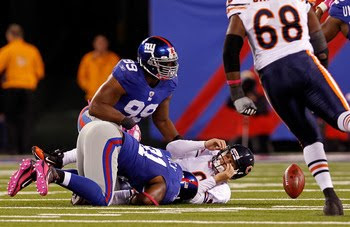 Whoa. Did Jay Cutler just get blown'ed up?! YES. And now some dude on the Giants is
doing some kind of gyrating upright seizure move to let us know he is in fact awesome at putting his body on vibrate. We kept rewinding that dance move/seizure, completely mesmerized, easily the best part of the entire game. I was watching with my girlfriends sister as we told her she had to see this, and she yelled, "eww grosss!" She did not think this chubby man was sexy hot, most likely his intention. Anyways, the Bears stunk. Jay Cutler held onto the ball like it was a cure for Diabetes. Somewhere in the middle of those 9 sacks I think he was actually trying to commit suicide. He had Hester wide open for a td down the sideline and misfired. The Bears missed recovering fumbles, missed interceptions, missed blocking defenders on their way to pile driving the only chance the Bears have of making the playoffs. It was a sloppy mess of a game. Even the Giants looked like they had some kind of voodoo curse placed on them. They shouldn't be celebrating too much. Maybe a 30 second synchronized gyration but that's it. Bears, I still love you. Get your shit together.
Posted by Pogo at 11:00 PM