Even to this day, over 30 years later, the gruesome sights and smells of the bucket still haunts me.  Now, this isn't a pleasant smell like that of a new pile of rail-road ties along the train tracks or the smell of my newspaper route papers burning.  No, this smell was quite offensive. The infamous 'bucket' of 1979 had quite a large appetite for things foul and nasty - you could say that it has seen the worse of human nature.  Noxiousness aside, it did admirably fulfill it's duties and thankfully it never sprang a leak. Yes, ocassionally there was a splash but you learned very quickly to be cautious- you could say that that it helped develop one's fine motor skills. Some qualities that came in handy when dealing with the bucket were: steady hands, good balance, intestinal fortitude, breath-holding ability, grace under pressure, and sheer determination. 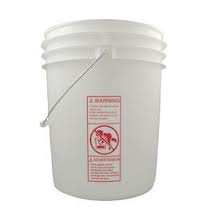 The bucket in this photo is not the original bucket nor did it look so white and shiny.  I suppose I should have posted a picture that resembles the bucket of my story, but I wish to be kind and show what our bucket was like when it was gleeming with newness, ready to perform honest work. Afterall, our bucket did not ask to be born and certainly did not expect to be defiled on a regular basis.
On to the story:
﻿﻿﻿﻿﻿﻿﻿ 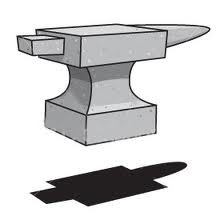 ﻿﻿﻿﻿﻿﻿
A baby of 7+ pounds was born although the weight of burden seemed much higher. The floors in the back of the house which included the kitchen and the bathroom, had to be ripped out and replaced.  My mom had the good sense to escape with the baby during these repairs leaving us to fend for ourselves. We added a toaster oven to the living room and removed the toilet.﻿ While the floors were being worked on, we had pot pies for a week. The beef was my favorite followed by turkey as a close second.  On hindsight, maybe pot pies although convenient, may have made things worse.
We had no toilet but we had a bucket.
It was my job to empty this bucket of multi-colored yogurt swirled excrement in the sewer that was in our backyard.  Yes I had to look in the bucket.  You had to size up your opponent. You had to prepare. You had to judge the potentiality of splash- it was all a logistics thing. Failure was not an option,
﻿﻿﻿
﻿﻿﻿

From the house, I would just go forward with tunnel-like vision toward that sewer, which by the way was a catch basin - ooops health hazard for the city.  I would empty the toxic dump making sure to hold my breath, for the fumes could make you pass out.  The last thing I needed was my limp lifeless body falling head first into a vat of the family stew. Winter was well on it's way so a combination of the cold weather and the fresh warm contents usually created an interesting cloudy fog that no doubt attracted the attention of our neighbors on both sides.
﻿
﻿
﻿ ﻿

I've often wondered why I love so much that scene in "Christmas Vacation" when Eddie is emptying the waste from the RV into the sewer. I guess I can really relate to it all - I've been there, I done that.  It's like a badge of honor- I can tell people I've dealt with some major shit in my life and I'm stronger for it.  Sure would love to get a photo with me and Eddie posing near a sewer or something. That  **** would be funny.*

* ok I really don't want a photo with randy quaid
Posted by crispy at 10:54 PM