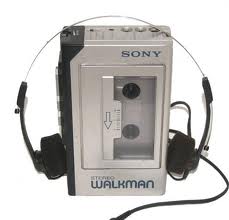 Sadly, in tech news, Sony has just announced that it will no longer be manufacturing and selling the Walkman Cassette player.  Yes, I said cassette.  I didn't know they were still making these things- it goes to show you that even after 30 years, in the face of stiff competition, the Walkman Cassette had such a strong appeal and hung in there and refused to die. Or maybe it's just a lot of clueless dumbasses out there.

before IPhone, MP3 players, CD players and the erosion of family values, there was the Walkman Cassette player. The Walkman was one of the 'must have' gadgets of the 80's and it established yourself firmly in the 'hip' crowd.  It can be argued that the Walkman started the now ubiquitous trend of social self-alienation - Now one finally had a way to drown out the irritating sounds of their family, and you could also pretend you didn't hear the homeless man asking for change-combine that with a pair of dark sunglasses and you practically became invisible.  The Walkman was also very convenient. Your music was truly portable and could go wherever you wanted to go. No longer did you have to lug around a heavy boom box to the playground to enjoy the sweet sounds of  Wham! while swinging away to your little hearts content. And if you wanted to get in the new fad of  'jogging', the Walkman was there for you, caressing your ears with sweaty foamy goodness.  But like all technology, something better is always around the corner.
﻿
﻿﻿
﻿﻿ ﻿