Ryne Sandberg will NOT be the new Cubs manager 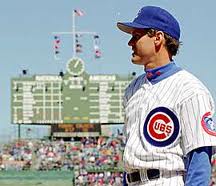 Why pass up on Ryno??? ugh, I'm disgusted. Now, I can understand you would want to pick the most qualified person to lead your team and they didn't think ryno was the guy, but since when have the cubs been serious about winning lately?  How much worse can it get? You had a chance to get a beloved cubbie icon who is in the hall of fame. The guy lives and breathes anything cubs. After spending 4 years in the minors to learn more about baseball, the guy won the pacific coast league manager of the year in 2010. Are these awards meaningless? There are an awful lot of disappointed cubs fans with tears in their beers.  I think Ryno is done waiting...he will move on.  A sad day for chicago.
Posted by crispy at 11:14 PM