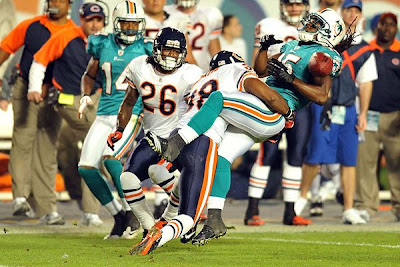 My original post title was going to read :
Bears outsmart surprisingly stupid Dolphins
My first sentence leading in:
Dolphins are supposed to be smart right?
I was going to go on and on about how the Dolphins used a 3rd string QB with only a few days of prep, and declined to run the ball. What idiots!

But the reality is I've seen the Bears be just as stupid throughout this season. Choosing to shoot themselves in the foot by going pass heavy leading to turnovers and close ugly losses. It seems now that the Bears are finally starting to find their stride and sticking to a more split pass/run ratio. With their strong defense I think this team is going to surprise a lot of naysayers this year. Again, playing a banged up, back-up squad in the Dolphins is again enough to keep most from not believing in Chicago. In my opinion, I'm going out on a ledge here and say I'd rather have this current team and coaching staff than the '07 Bears that went to the SuperBowl. Whaaaat?! Wait, I still can't believe the Bears actually went to the Superbowl in '07. Good D goes a long way. Throw in Jay Cutler and the ability to score points when trailing...Yowzers. I'm trying not to oversell them, maybe only to over compensate for all the Bear haters out their in the form of commentators, sports writers, espn power rankings, Kellens', and even pessimistic Bears fans. Shut down Vick next week and suddenly watch how fast they all start jumping on the bandwagon.

****
Stay tuned for video of our friend Kellen eating dog food.
Posted by Pogo at 3:50 PM