Why, why the hate?  I'm referring to the not-so-loving feelings Bears and Packer fans have toward each other.  Reassuringly, most fans hold a moderate stance and you would probably find a lot of indifferent folk along with a few who just know nothing at all- the latter group being comprised of nerdy kids/nearly all women/new residents of Chicago/metro/those on lactaid.  And let's not forget about the crazy ones.  "It was a cow from Wisconsin that burned down our city!, you damn right I'm mad!"
Hey I'm all for friendly banter and light-hearted ribbing.  Did I just say the same thing twice?  But I don't understand the hatred.  Some examples.

-The FBI foiled the plans of a Chicagoan who was planning on hosting a huge fondue night with his outdoor hot tub.  Plans called for filling tub with velveeta and throwing in some kidnapped packer fans and then feeding them to a thousand hungry rabid mice.

This needs to stop. It's getting out of control.
As the voice of reason, I will say that it is perfectly fine to have a spirited rivalry with another.  It makes things more interesting.  It's fun trash talkin. Let's keep it at that level.

I'm old enough to remember all those nasty cheap shots inflicted on the Bears by Green Bay.  I remember walter payton being knocked out of bounds and pushed over a bench, I remember jim mcmahon being picked up and slammed on his shoulder after the play was called dead, I remember the vicious hit on matt suhey.  But that was a different time.  Those players don't even have memories of it anymore due to repeated head trauma.  So let bygones be bygones.  Let's all join hands and unite in the brotherhood of football fans. 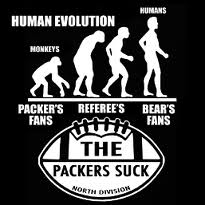 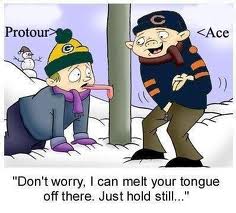 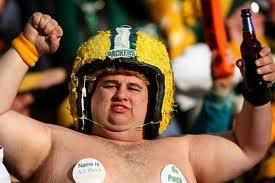 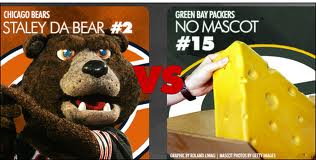