"hear the flash, like a flame, faster than a plane, a mystery with the name...."

Over the past couple of days the world has been immersed in the details of the devastating 8.9 earthquake and tsunami that struck mainland Japan. After some explosions at the nuclear power plants, authorities are now trying to cool down the reactors to avoid a complete meltdown. Yeah, thousands dead, cruel world, shit happens, must be God's plan. As I was reading the news I took notice that one of the power plants that exploded was 40 years old.  Thinking about Japan and the early 70's brought back a long lost memory of a TV show I watched as a kid, a Japanese sci-fi show dubbed in English


Looking up some info on Wiki I find out that Spectreman originally aired first in Japan in 1971.  Yes, that's 40 yrs ago. Also surprising, Tokyo at the time was considered one of the most polluted cities in the world and this sci-fi TV show may have been inspired by that as it dealt with 'saving the world' themes. Later on. the show aired in the Chicago area in the later 70's on UHF.  I believe it was channel 44. All I remember is that it was one crazy show with a very catchy theme song. 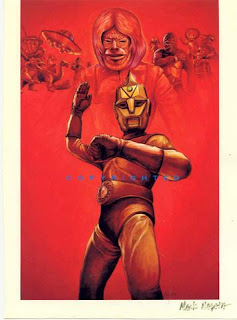