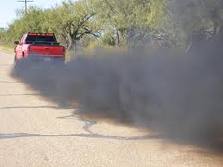 I'm always amused by the commercials you see during a NFL football game- in my case, the chicago bears, who are sucking so bad that the commercials are more entertaining anyways..  I'm not referring to intentionally humorous light-beer ads but ads for pickup trucks-more specifically, the full sized trucks.  I can't help but chuckle when I see a dodge, chevy or ford mightily showcasing it's mind-numbing horsepower and torque by hauling a cruise ship up a winding mountain or traversing through an impassable river or climbing over monstrous boulders. Nevermind that most people who buy pick-ups would rarely go offroad, if ever they do, or would rarely utilize all 342 cubic feet of bed space-it doesn't matter, guys love their trucks.
I will give you an example of an inside-the-head conversation of a guy named Chuck, a man dreaming up scenarios as he drools over his future truck.

alpha chuck- "hahaha! - calm down you pansy-ass, you are forgetting that you are sitting in my  ford f350 4x4....the most powerful truck in its class....we are just going to blaze a path of destruction of our own...you will see your chubby kids in no time, so wipe those tears away brah......we gonna kick some earth-ass"

beta chuck- "ok i feel so much better, I'm soooo glad you got this truck, you are one smart man"

If it's not feats of boner-inducing hauling power,  its an appeal to your pseudo-patriotism with some catchy country song featuring a bunch of cowboy-hat-wearin studs representing good ole fashioned hard workin americans.

These testosterone-laden  ads are no doubt effective in piquing the interest of men who want to feel more powerful- guys that wanna break stuff, maybe run down a family of deer or some mailboxes or maybe it's just comforting to know that if there is a 7.4 magnitude earthquake, nothing will stop them from getting a slurpee at 7-11.

Now let's turn away from pickup trucks and focus on the family vehicle. I'm irritated at this one.
There is an ad out for the toyota highlander where some punk 8 year old kid looking on with disdain at the old minivan, tells the camera-
"Just because you're a parent doesn't mean you have to be lame,"

Whoa!, I know advertisements are meant to persuade the consumer but this is shameless, -over-the-line I tell ya.  The ad is no doubt targeting parents who would be afraid of appearing 'uncool' to their bratty kids.  I sure hope there aren't spineless parents like this, or our country is ****ed.

At that age, I was just happy that the car would start.
Posted by crispy at 12:12 AM